By Jeff St. John Electric trucks and buses may be approaching cost parity with their fossil-fueled counterparts, and they’re certainly cheaper to fuel over the long run — and that’s not counting their carbon and pollution emissions benefits. But that’s just a slice of the costs of switching bus and truck fleets from fossil fuels to batteries. Unexpected costs and bottlenecks in charging infrastructure, fleet operations and maintenance, and permitting and financing weigh on cities and states mandating electric bus fleets, or private companies with large-scale delivery truck electrification goals. Solving for this “total cost of electrification” equation will be a critical step in pushing EV trucks and buses from the margins to the mainstream in the coming decade, according to a report released Wednesday by Environmental Defense Fund, MJ Bradley and Vivid Economics. “We’re seeing the technology increasingly ready, and capital increasingly eager to invest in sustainability” via fleet electrification, Andy Darrell, EDF’s chief of global energy and finance strategy, said in an interview. “And yet the deployment, especially in the medium and heavy-duty sector, might not be moving as quickly as we’d like to achieve big climate goals.” For the rest of the story visit: https://www.greentechmedia.com/articles/read/cutting-the-total-cost-of-electrification-for-bus-and-truck-fleets
Posted by Gabie T.
Email ThisBlogThis!Share to TwitterShare to FacebookShare to Pinterest

KidWind is proud to partner with the CREATE Center to bring our virtual renewable energy educator workshops to educators across the US.  If you are a 6-12th grade science, technology, engineering, or math (STEM) teacher use the coupon code, CREATEWKS2020, and it will reduce your registration fee to ONLY $10!  That saves you $140!  These 6-hour fully virtual workshops are hands-on and focus on delivering just enough content knowledge to get going, as well as a wide variety of practical activities for your classroom.   If you manage to take attend and complete all three of workshops - Energy & The Power Grid, Wind Energy Fundamentals and Solar Energy Fundamentals and attend an educators webinar on successful implementation you will receive $200 in bonus gear that you get to choose!  No prior energy knowledge is needed to attend these workshops.  All participants receive a box of materials before each workshop that will allow them to explore the lessons. To register visit: https://www.kidwind.org/training/workshops
Posted by Gabie T.
Email ThisBlogThis!Share to TwitterShare to FacebookShare to Pinterest

Schools across the country are considering solar photovoltaic installations on campus to produce energy for their facilities and to provide an educational resource for students.  A solar roadmap can help your institution to create a strategic plan to prioritize solar development on campus. To register for the webinar email Gabrielle Temple at Gabrielle.temple@canyons.edu

Join us as we hear about Germany's energy systems with a focus on energy storage. Our first presenter will be Frances Ball of Launch Alaska. She will present her findings on Germany's energy systems and compare them to Alaska. She will then give an overview of several energy storage options. We will then hear from Dr. Kai-Philipp Kairies who will present his research on battery storage.

The sun was shining Monday afternoon, shedding some light on a new subject that is growing in popularity for college students.

Along the wide-open space near Madison Area Technical College in Fort Atkinson, there is the start of a new energy source that will be able to supply the college with all the power it needs.

But more importantly, students will get to learn about one of the fastest-growing industries in the nation by studying the engineering and installation of solar power.

“In the last decade, solar has really exploded,” said Ken Walz, a science and engineer instructor for MATC.

The school has had a renewable energy program for the last 15 years that originally focused on biofuels.

On the Fort Atkinson campus, MATC also had a wind turbine for about a decade that was dissembled last year after a gear box broke.

Walz said educators used the turbine to teach students about wind technology. But the cost to fix the problem was expensive, so the turbine was sold to someone in Michigan who will put that equipment into operation there.

“We were looking at some necessary repairs, and enrollment in wind (energy) classes had gone down over the last several years,” Walz said.

Biofuels also is maxed out in this state, he said, with not much opportunity for jobs growth.

But solar power now is booming and for a good reason. Not only is there abundant sunshine for a place like MATC to operate a facility, but the technology to build solar panels is relatively inexpensive.

In fact, Walz said installing a solar energy system is 90 percent cheaper to build than in 2003 when MATC first installed one.

The growth in the school’s program for wind and solar power is starting to reflect a major shift in the energy industry, Walz stated.

“We can generate a lot more energy from solar at a lower cost and have a lot more students,” he said.

For the rest of the story visit: https://SolarPower@MATCHelpCollegeStudents

New changes to grid interconnection standards now require secure communications between the utility company and the inverter. California investor owned utilities are requiring compliance to these standards for NEM interconnection.

Come learn about the changes to these interconnection standards, how they impact you and the homeowner, and what you can do to comply.
For more information and to register: https://UtilityComWebinarCARule21
Posted by Gabie T.
Email ThisBlogThis!Share to TwitterShare to FacebookShare to Pinterest

The Fall Cohort of Solar Ready Vets Fellowships is off to a great start!

Solar Ready Vets Fellowship extends the corporate fellowship by Hiring Our Heroes to the solar industry. Mid - senior level service service members are placed with solar employers for 12 weeks of on-the-job training and professional development to support a smooth transition from military service to the civilian solar workforce.

Solar employers: want to host a Solar Ready Vets Fellow?
We're now recruiting employers to join us for the Winter  2021 Cohort!  Placements will be made in management and professional roles, such as business development, project management, communications, and operations.

The California Public Utilities Commission (CPUC) issued sweeping changes to Rule 21, the rules under which distributed energy resources, like solar power and energy storage, may interconnect to California’s electric grid.

The changes represent a radical shift in how states handle interconnection policy, with a number of unprecedented changes that will provide a model regulators in other states can look to as they work to enable more renewable energy on the grid through modern interconnection policies. The Interstate Renewable Energy Council (IREC) was deeply involved in developing and advocating for many of the changes adopted and commends these efforts by the CPUC.

“IREC applauds the CPUC’s recent updates to Rule 21, which significantly modernize California’s energy policy and pave the way to more rapidly deploy large amounts of clean energy—critical to meeting the state’s climate commitments and increasing resilience,” said IREC President and CEO Larry Sherwood. “Today’s changes are a major milestone that represent the culmination of many years of work. IREC has been engaging on Rule 21 since 2011 and involved in almost every major innovation, including helping to develop California’s Integration Capacity Analysis, which today’s decision puts into use in improving the interconnection process.”

For the rest of the story visit: https://IRECApplaudsUpdatestoCA Rule21

By Matthew Mercure
Since 2014, K-12 schools have seen a 139% increase in the amount of solar installed, according to a new report from clean energy nonprofit Generation180, in partnership with The Solar Foundation and the Solar Energy Industries Association (SEIA).
The report finds that 7,332 schools nationwide utilize solar power, representing 5.5% of all K-12 public and private schools in the U.S. Over the last five years, the number of schools with solar increased by 81%, and now 5.3 million students attend a school with solar.  The top five states for solar on schools – California, New Jersey, Arizona, Massachusetts and Indiana – helped drive this growth.
“Solar is absolutely attainable for all schools – regardless of how sunny or wealthy it is where you live,” says Wendy Philleo, executive director of Generation180. “Too few schools realize that solar is something they can take advantage of to save money and benefit students today.”
For the rest of the story visit: https://k-12solarforsavings
Posted by Gabie T.
Email ThisBlogThis!Share to TwitterShare to FacebookShare to Pinterest 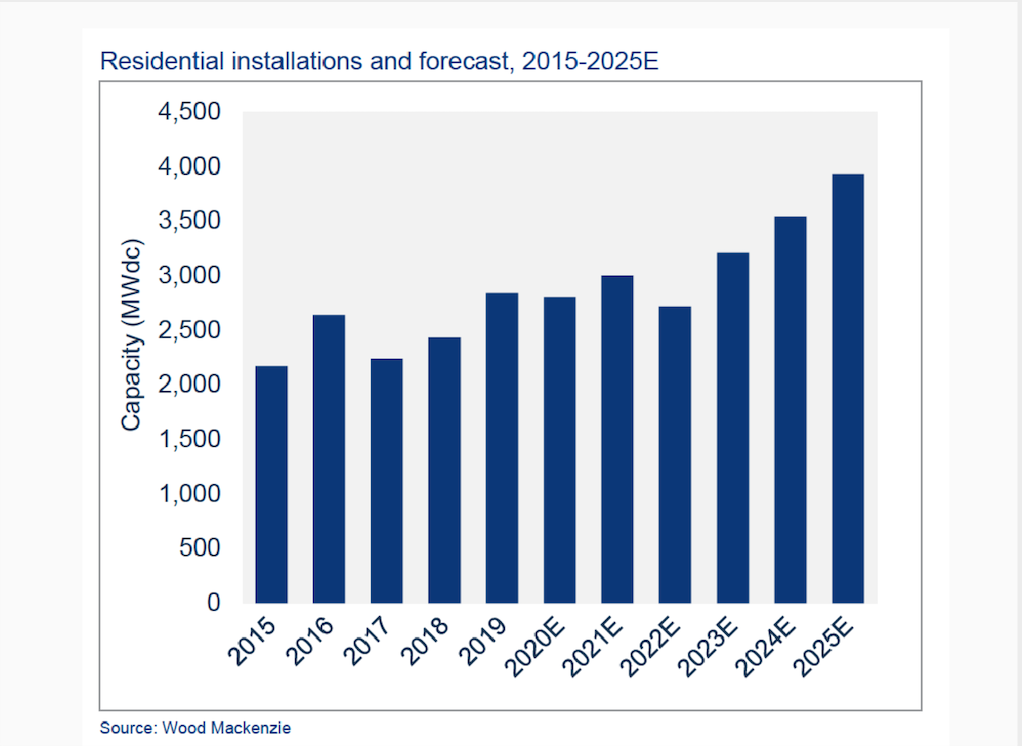 “The growth we see in this report underscores the resilience of the solar industry as we deal with COVID work stoppages, a struggling economy, harmful trade policy and an uncertain tax environment,” says Abigail Ross Hopper, president and CEO of SEIA. “Tens of thousands of our workers have been laid off or furloughed amid this crisis, and SEIA remains firm in our commitment to fight for equitable policy that allows the solar industry to compete and grow our workforce.”

For the rest of the story visit: https:UtilitySolarStrongDespitePandemic

>>Back to Main Site